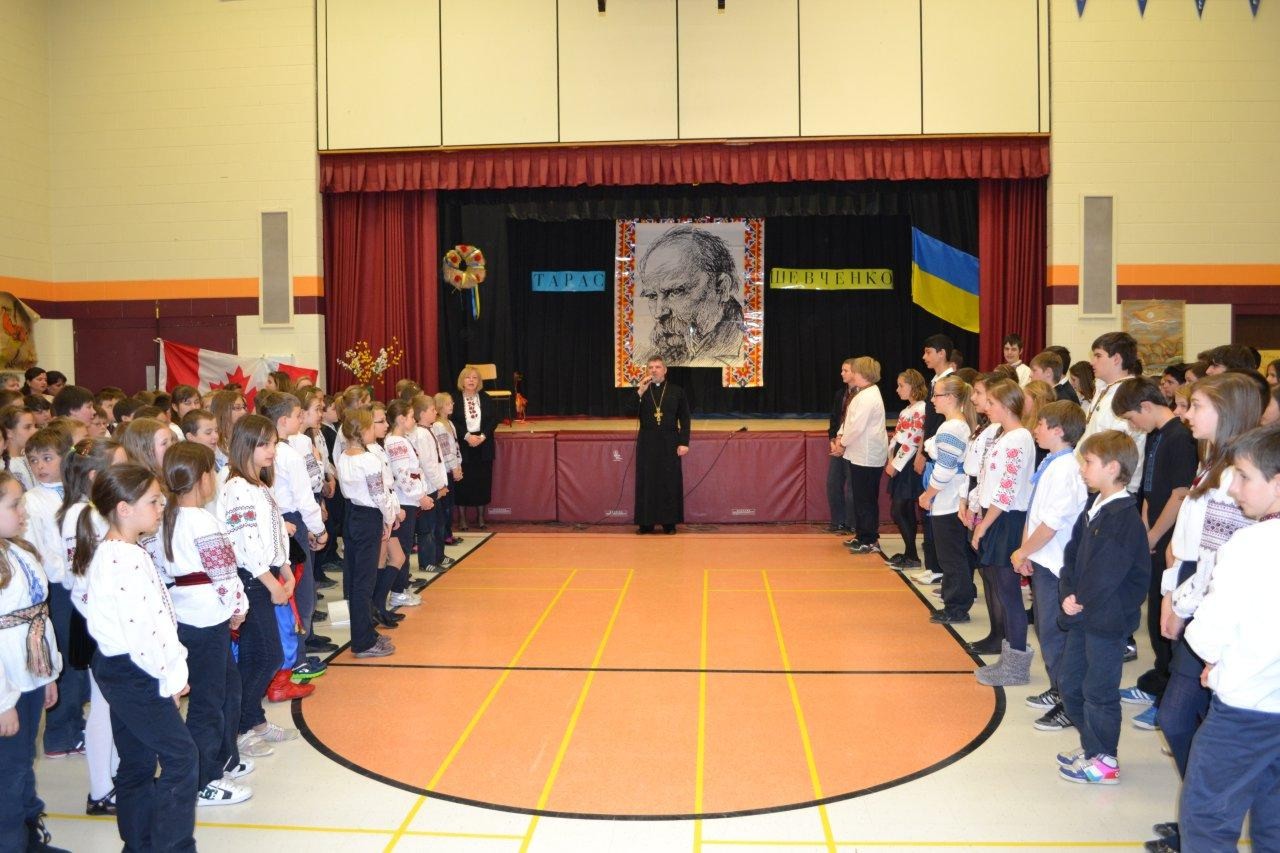 On Wednesday March 7th St. Sofia School honoured the birthdate of our Kobzar the great Ukranian bard, artist and humanist Taras Hryhorovych Shevchenko, with an exceptional concert. Thanks to the principal Mrs. Patsy Kasij and our teachers, the event was organized with a high standard of excellence. On the above picture, our Pastor The Rt. Rev.  Protopresbyter Roman Pankiw, starting with the opening prayer, speaks to the students, thanking all who took part in the organization of this event, and also our catechists Very Rev. Roman Trynoga and Very Rev. Bogdan Mironovich, reminding the students of the great meaning of such a memorial concert in nurturing the young soul, and children's love for God and their Ukrainian heritage.

St. Sofia School formally opened  its doors on September 2, 1980, with 113 children from Junior Kindergarten to Grade 6, 11 teachers, a principal and a secretary. It had the support of the two local Ukrainian Catholic pastors, the Ukrainian community of Mississauga and Brampton and the Dufferin- Peel Roman Catholic District School Board.

The dream of having such a school was that Very Rev. Father Matthew Berko, pastor of St. Mary's Dormition Ukrainian Catholic Church in Mississauga, and Ted Antkow. In 1977, they were already discussing the possibility of establishing such a school so the children of the parish could learn in an Byzantine Eastern catholic Rite setting and have the opportunity to study the language and culture of their ancestors as part of their regular school curriculum. It was their motivation and drive in attending city council meetings, making presentations before members of the School Board and talking to the parents, that laid the groundwork for establishing such a school.

In 1978, The Executive committee was formed to further realize this dream. Initially, the mandate of the Executive council was to be a liaison between the Dufferin-Peel R.C.D.S.B. and the Ukrainian community. Over the years, members of this committee became instrumental in facilitating various aspects of St. Sofia School not provided by the Board. This included the purchase of Ukrainian language library and text books, computers, Ukrainian Language staff and even busing when it was not provided for the students. This committee had indeed made a significant contribution to the school.

The name " St. Sofia " was chosen for the school by Nadia Luciw the board appointed principal and Rev. Father Berko. The patron saint of the school lived during the Roman empire and had three daughters - Vera (Faith), Nadia (Hope) and Lubov ( Love). The name "Sofia" means "wisdom", an appropriate symbol for a school.

Many school events have become school traditions: S. Sofia Molebens at the beginning of the school year, St. Nicholas concerts in December, lighting of he Christmas Eve candle "Svitchechka", the blessing of water on the Feast of Jordan, the Taras Shevchenko concert in March,the making of pysanky in spring, the blessing of Easter food and performing of "hahilky"on Bright Tuesday and remembrance of the victims of the Forced Famine of 1932-1933.